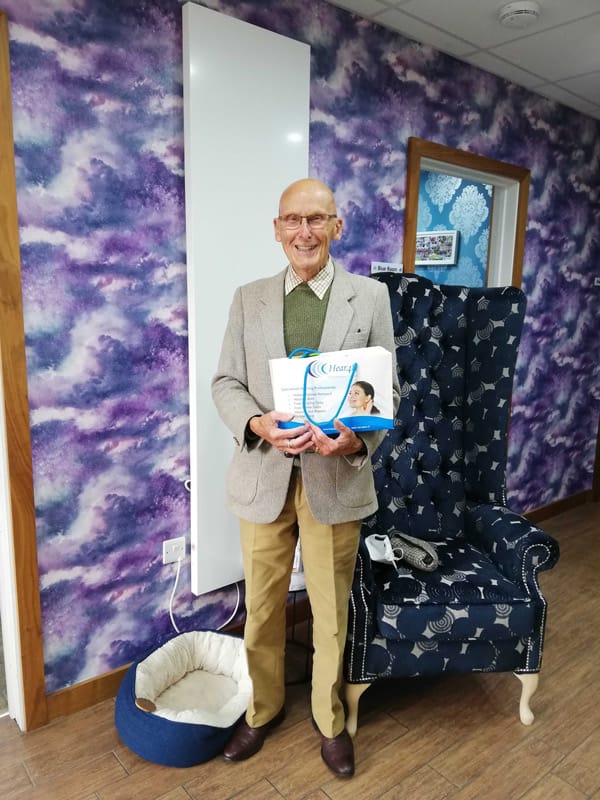 Brian Senton was only 17 years old when he joined the navy in 1951 and spent the next ten years serving on carriers such as HMS Triumph, Bulwark, Eagle, and the Ark Royal.  Obviously being in the Fleet Air Arm Brian was exposed to aircraft engine noise in abundance!

Brian was responsible for the radio, radar, and other electronics in the squadron’s aircraft.  In 1956 as part of the ground crew, which meant supporting Seahawks leaving and returning to the carrier.

There were 12 serviceable Seahawks per squadron which were lined up and were then positioned in line for flying stations.  When the pilots were safely installed, they would check their radios, give their thumbs up to the ground crew, and on command would all set off their cartridges start and rev the engines of the planes.  The flight deck officer would then signal the planes one at a time to go forward to the catapult.  A sling was hooked from the plane to a block on the deck that was driven by steam.   When it was clear for the plane to launch, the person in control would raise a flag in the air, the engine went up to full revs, and then as the flag was lowered the catapult would launch the plane into the air at around 100mph. The Noise was horrendous;   There could be more than one squadron on the ship so this activity could go on for many hours.    An hour or so after take-off the aircraft would return, fly around the ship and land, one at a time at 20-30 second intervals.

Brian was also trained as a marksman and became an excellent shot.  However, this also impacted on his hearing as his left ear in the high frequencies,  is even worse than his right, actually going off the audiometric scale for recording hearing loss.

Brian has been having real problems with hearing in everyday situations.  His hearing loss which is a typical ski slope from mild in the low frequencies to profound in the high frequencies with recovery at 6-8kHz (typical of noise exposure) means that he only hears the low-frequency element of speech which are the vowel sounds and some consonants.  But the speech elements that give words shape and distinction he would not hear without amplification from hearing aids.  The things that Brian enjoyed such as watching television and attending meetings were extremely difficult, and there comes a time when it is that difficult that individuals start giving up the things they enjoy!  This can be quite dangerous because this can make the person unhappy with their life and lead to depression, so it was important to us that we reacted as quickly as we could before Brian stopped going to his meetings.

In the past, Brian had purchased basic amplifiers off the shelf to initially get him by with it in his left ear, and eventually got NHS hearing aids which as he says were okay until he attended his meetings.  Brian is part of the Royal British Legion conference committee, and this was where he couldn’t cope with the NHS aids, and the whole situation as he states could occasionally feel embarrassing and demoralizing.

The problem Brian would have at the meetings would be the distance to the speaker, and potential background noise.  At 86 years young he has a huge amount of wisdom and experience to offer at these meetings, but equally his enjoyment of them and the happiness and usefulness it gave Brian, made it imperative to sort out his ears!

The area Brian lives in is covered by an Independent Audiologist company called Hear4u.  Hear4u is a highly qualified organization providing hearing care in Leicestershire, Warwickshire, and Northamptonshire.  They have worked very hard to be accredited by the IDA Institute with patient-centered care awards, and other awards from leading manufacturers in the quality of their dispensing of hearing systems. Operating out of three beautiful and well-equipped centers, they also offer a superb home visit service, which has led to them being known as the Hearing Homecare Professionals.

Brian was fitted with Phonak Marvel M90 hearing aids which are wireless and Bluetooth.  These were chosen as we know with decades of experience in the audiological world that with an older client, this type of loss and the desire to sustain a social lifestyle only the best technology is capable of providing the sound to noise ratio required to allow the user to relax and just enjoy the experience of listening with clarity.  This is what Phonak M90’s provide with fabulous background noise suppression and speech enhancement.  The Bluetooth component of the hearing aids is fabulous for interlinking with the TV, mobile phone, etc.

Phonak is part of the Sonova group which began in 1947.  Based in Switzerland, they are known for their development in technologies advancing the technology-based in hearing aids, and also funding research into the cognitive relationship between the ears and the brain.

Having spoken to Brian today, when we could catch him in with his busy social life, he had taken delivery of the hearing aid, 24 hours ago.  He already has them linked to his mobile phone and cd player.  He told me that as he walks down the road if he receives a phone call through his mobile, he can just press the button on the hearing aid and continue walking and hold a really good conversation, and people think he is mad walking along talking to himself!  He has also attached his TV which is now much easier to hear, in fact, it has made it effortless.  He can listen to the TV or his music and not bother his wife, his hearing aids have become almost invisible headphones.

As I said to Brian it is early days but that is fantastic feedback after 24 hours.  Well done everybody involved in this collaboration of supporting a Veteran who served his country in his time of need.

We are still here for you!