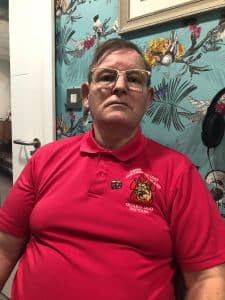 Thomas Agnew joined HMF in 1971 as a 17-year-old.  After his basic training, he was posted to an Artillery Regiment at Barton Stacey in Hampshire. Whilst the others were deployed to Northern Ireland, he was still under 18 and was not allowed to go, so he was given a chance to work on the Dog Section, which he jumped at. After his dog handlers’ course, he was then given a dog and carried out security duties on the rear party looking after the Barracks. 1973 saw him move to Kirton Lindsey in Lincolnshire where he remained on the Dog Section.

In 1974 he volunteered for an E2 posting with the Army Dog Unit Northern Ireland and was posted to Long Kesh Prison doing security duties.  Towards the end of 1974, he had started to notice a deterioration in his hearing so he went to see the Unit Medical Officer and was referred to see an audiologist, where he was told he would need an operation on his right ear. This was done in early 1975, and he was issued with a hearing aid. Once he got back to his unit he was told he could no longer work with dogs as they would further damage his hearing, so he was sent to the Orderly Room where he remained until 1978.

In 1978 he was posted to the Royal Army Veterinary Corps Training Centre where he worked in the Orderly Room as a clerk. In 1978 he was told his hearing had deteriorated and was issued with a more powerful hearing aid.

After being posted to the Army Dog Unit Northern Ireland again in 1982 his hearing deteriorated even more and this resulted in him having an operation, this time on the left side. Being provided another more powerful hearing aid he served the rest of his Army career in the Orderly Room RAVC Training Centre as a clerk where he was discharged in 1988 and awarded a war pension for his hearing.

After years of different hearing aids provided by the NHS, Mr. Agnew contacted the UK Veterans Hearing Help (Now the UK Veterans Hearing Foundation) to find out if he would be able to get help with his hearing. He was really struggling with his hearing in all situations. The television had to be turned up very loud to hear what he was watching. He said when his wife was standing close by to him, he would still miss hearing what she was saying to him. All of this would make him feel isolated and left out.

On testing Mr. Thomas Agnew it was found that he had bilateral flat severe to profound hearing loss, with conductive elements. This was quite a dramatic loss with huge loss of clarity on both sides which is why he would have great difficulty one to one and in background noise, it would be very difficult as he has no clarity.

Mr. Agnew has now been fitted with the latest superpower hearing aids from Phonak as they are a power hearing solution for severe to profound hearing loss. They increase the audibility of high-pitched sounds. Due to the severity of his loss, these will be the most powerful and most suitable hearing aids. As he was struggling to hear the television with only his hearing aids, we have also set him up with a Tv streamer so he can stream sound directly from the television to his hearing aids so others can watch at a more comfortable volume.

‘’I applied to UK Veterans Hearing Help to see if I was eligible, I filled the form in and sent it off.  2 days later an appointment for a hearing test was made with hear4u for me.

I attended for this and the next stage form was filled in and sent off.

9th April 2019 I went to have my new Phonak Hearing aids fitted by Roger Stokes, I was very impressed straight away the clarity and the sounds also the aids themselves.

I would like to finish by thanking Roger, Hear4u also the UK Veterans Hearing Help Service for all their help throughout and I would certainly recommend veterans to apply.’’