Mr David Leyland an RAF veteran of 12 years has now been fitted with a pair of top of the range Widex Moment Hearing aids, provided by Widex themselves in supporting Mr Leyland to hear well again and manage his tinnitus.

David worked on the flight line with jet aircraft during his time in service, being exposed to loud noise daily, causing him to suffer with hearing loss going into his civilian lifestyle.

How hearing loss affects him:

Mr Leyland has a mild sensorineural hearing loss on the right side and mild-moderate loss on the left. He experiences tinnitus on the left side as a result of the high frequency asymmetry. This is something that bothers him from a day to day basis but does not yet stop him sleeping. The asymmetry also affects Mr Leyland’s ability to localise sound, especially in a challenging listening environment. He finds his hearing loss frustrating as well as isolating. He reports difficulty following social conversations in restaurants as well as during meetings, especially is there is competing background noise. The television is up louder than his wife would have it, but the telephone is generally okay if he uses his right ear. Conversation in the car can be difficult, especially when he is driving as his wife is on his left side. Since the beginning of the Covid 19 pandemic, mask wearing has only increased Mr Leyland’s communication difficulties.

The Widex Moment hearing aids are well suited to Mr Leyland as the Puresound technology will help him to adjust to his first experience of amplification. Widex Moment RICs are the smallest rechargeable receiver-in-canal option available, helping Mr Leyland feel comfortable in his discreet hearing solution. Widex’s Zen Therapy can include the use of fractal tones, which will provide Mr Leyland with an extra acoustic stimulus, giving his brain distraction (and hopefully some relief!) form the tinnitus.

David was  fitted with his hearing aids on 12th November 2021 at Rothwell Hear4U by Rosie Dooley.

At David’s  follow up 2 weeks after his fitting. He has been an exemplary first-time hearing aid user, data logging showing that he has worn the hearing aids for nearly 10 hours a day and is therefore getting used to them very quickly. Mr Leyland is amazed to hear some sounds that he hasn’t heard before, or in a long while. He feels safer while walking out near traffic as he is more aware of where the cars are. He reports big improvements to his hearing in a noisy environment, conversation in the car and his wife has said that sometimes she must now ask him to turn the television up for her! Mr Leyland is very pleased to report that his tinnitus has overall been reduced since he has had his hearing aids. He occasionally has a louder hour or two but nothing that is bothersome, since he has a greater understanding of his tinnitus in general. The Zen program was enabled on the hearing aids and set up the app on his phone so he can access this program when he needs.

We carried out an interview with David which gives us a full background of David’s journey through life and in the forces. Watch the full interview with James Dawson and David Leyland by clicking here

Mr Leyland will receive the continued support from the UK Veterans Hearing Foundation alongside Hear4U. 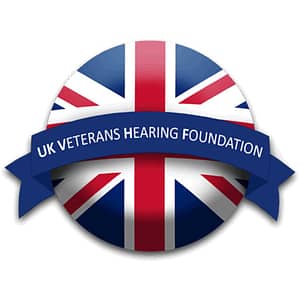 UK Veterans Hearing Foundation Based in Their New Office.