After serving 26 years in the army, Mr Gordon Raku turned to “Veterans Hearing Help” for hearing support, and while he was unable to receive funds through the Hearing Fund, the UKVHF continued to push for funds to support Gordon in receiving a pair of hearing aids to give him a better quality of life going forward.

Gordon’s hearing assessment showed a moderately severe sensorineural hearing loss bilaterally. This type of hearing loss is typically associated with difficulty in complex listening environments where there are competing background noises. It is difficult for people with this kind of hearing loss to understand softly spoken speakers and conversations over a distance especially if they are unable to see the speakers face. It is also common for people with this type of hearing loss start to avoid complex listening environments which can lead to social isolation and a decreased quality of life over time. The preferred volume of the television or radio for a person with this kind of hearing loss is too loud for normal hearing individuals, and  conversations over the phone are difficult due to the lack of visual cues.

Gordon struggles everyday with his hearing, and often has to ask people to repeat themselves three or four times in social situations sometimes to understand what is being said. He also does not like speaking on the phone because it is too difficult to hear, and has the volume on the television much louder than his wife would like it so relies on subtitles. Gordon feels embarrassment when he is unable to hear around others, which takes affect on his mental health making him feel isolated.

Gordon was assessed at Hear4U Rothwell with Rosie Dooley. He has now been fitted with a pair of Starkey Livio 1600 hearing aids and has already noticed a great improvement to his hearing. When wearing this device, he will have access to speech sounds that he currently struggles to hear as it provides better intelligibility in noise and less listening effort. 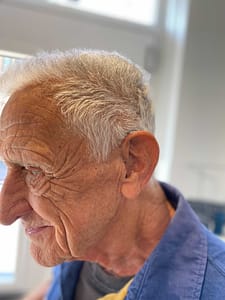 Gordon will now go on to receiving an aftercare service with Hear4U, as well as the continued support by the charity. We wish Gordon all the best with hearing well again!