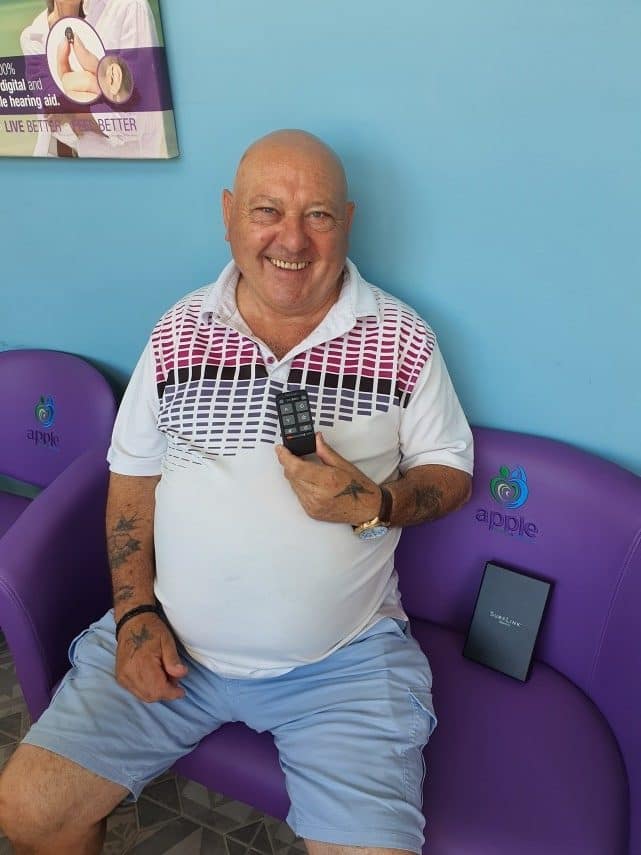 Mr Murray served for 7 years in the British Army who has now been fitted with top of the range hearing technology by Apple Hearing and Healthcare in Spain.

Mr Murray served in the Royal Corps of Transport from 1971 to 1978, at first Mr Murray supplied with plastic ear defenders which were very poor. He took part in a lot of live firing on the regimental shooting team, he was in the territorial Army for 6 years and he was also on the radio opp which created white noise.

His struggles with hearing loss

Mr Murray was struggling to understand conversations he was having with others and constantly asking people to repeat.

After years of suffering from debilitating hearing losses following to his subsequent valuable services in the military, we are very pleased to be able to help MR MICHAEL MURRAY in obtaining hearing devices together with suitable accessory and we hope he will be able to enjoy his restored hearing and start enjoying his life again. Thanks to the help of the charity UK Veterans Hearing Foundation, which we are very proud to be associated with, we aim to help more ex-Armed Forces Personnel who had defended our Queen and country and have relocated to the Costa Blanca/Costa Calida and Murcia areas.

Mr Michael Murray has been suffering from hearing losses resulted by exposure to noise during his services in the army and for years has been trying to obtain funding towards his hearing devices. Fortunately, with the help of this valuable foundation, we hope that Mr Murray will start enjoying his deserved retirement to the fullest.

A wonderful extract from Gary Hagerty at Apple Hearing about Mr Michael Murray.

Mr Murray hearing journey started with us in July last year. He visited our hearing centre in Ciudad Quesada enquiring for our FREE, NO OBLIGATION hearing test and he advised us that he served in the British army. We had forwarded his details to the charity with the hope that he will receive funding towards his hearing devices and we were pleased that we are finally able to help him.

Once the funding has been approved, Mr Murray attended an extensive hearing test with our audiologist who recommended suitable hearing devices and accessory based on his hearing losses and lifestyle. We proceeded to ordering these products with our manufacturer and the fitting appointment was completed on 7th July 2020 when our audiologist spent about an hour with Mr Murray going through his hearing aids and showing him the programmes and functionality of the accessories accompanying his aids.

As Mr Murray has been suffering from hearing losses for many years, great care is taken to ensure that the volume on these devices are not too high to prevent any discomfort. We will see Mr Murray in the coming months to evaluate how well he is adapting to the new devices and to adjust the volumes accordingly. Our devices also can help alleviate tinnitus (in which Mr Murray suffers) and we are hopeful that by wearing the hearing aids, it will help Mr Murray’s tinnitus tremendously.

The UK Veterans Hearing Foundation would like to show gratitude to the Veterans Foundation  (Veterans Lottery) for exceptional funding that has allowed us to improve Mr Murray’s life in the dire times of COVID-19.

Army Veteran fitted in his own home!

A Decade Spent on the Seas has an impact for life!