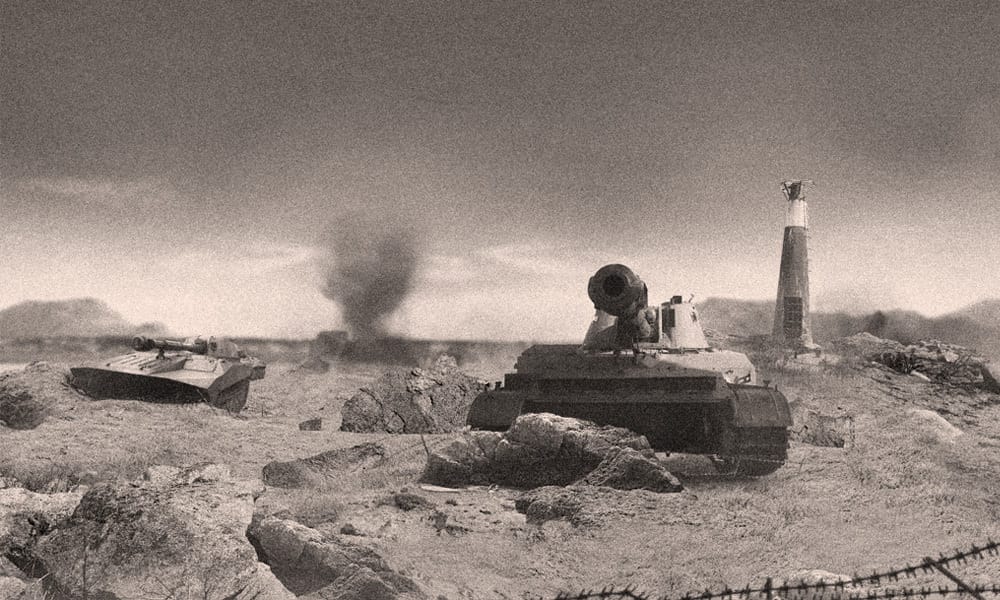 Technically the Second Battle of El Alamein following the earlier victory in the First which prevented Nazi Germany and Fascist Italy from encroaching further into Egypt, the Battle of El Alamein is a huge point of pride for those who took part on the allied side in World War II.

The first major success against the Axis forces since Operation Crusader in 1941, the Battle took place between the 23rd of October and 11th of November 1942 and gave the Allied forces a huge morale boost that would be crucial in going on to win the wider war.

It took place near the Egyptian railway halt of El Alamein, now a small town with some 8 thousand inhabitants, and ultimately led to the end of the Western Desert Campaign, removing the Axis threat to Egypt, the Suez Canal and the Middle Eastern and Persian oil fields.

German and Italian tank and infantry units known as ‘Panzer Army Africa’ had made their way into Egypt after their success at the Battle of Gazala, threatening control of the Suez and the Middle East oil resources. Their leader, General Rommel, had already tasted defeat at the hands of the Eighth Army under the command of General Claude Auchinleck as the first frontal assault at El Alamein failed to press on.

The Eighth Army counterattacks had also failed to press home the advantage, with Auchinleck choosing to call off the attacks on the Axis by July in order to regroup. In an attempt to relieve his forces, Winston Churchill and General Sir Alan Brooke (who was Chief of the Imperial General Staff) made their way to Cairo to replace Auchinleck with General Harold Alexander and Lieutenant-General Bernard Montgomery.

This move would prove controversial in the years since, as it transpired that it was Churchill who encouraged Auchinleck (known colloquially as ‘The Auk’) to go on the attack in a series of moves that eventually ended in an exhausted and depleted Eighth Army. Historians have since gone on to recognize Auchinleck’s invaluable contribution to the first defence at El Alamein.

However, the Auk’s replacements were certainly not without merit. After realizing that the Allies were gearing for reinforcements, Rommel decided to strike first: two armoured divisions of the Afrika Korps and Panzerarmee Afrika (subdivisions of the wider attack force) were sent to begin the charge, but found themselves held back at Alam el Halfa ridge (later known as the Battle of Alam el Halfa). In response, Rommel decided to plant extensive minefields and miles of barbed wire in order to fortify their position.

Meanwhile, Auchinleck’s replacements Alexander and Montgomery were building a force designed to annihilate the Panzarmee Afrika. Until June of 1942 Rommel had been using American code stolen by the Italians to intercept messages sent to Washington, thereby receiving detailed information about the positions and strength of the British forces. This finally unravelled when the Australian 9th Division captured the German 621st Signal Battalion in July 1942.

Having lost his intelligence advantage, Rommel was now placed into a difficult position. British intelligence, utilizing Ultra and local sources, now had the upper hand as they discovered the Axis supply positions and intentions. With careful manoeuvring, intelligence allowed supply ships destined for North Africa to be intercepted, leading to the Panzerarmee Afrika being down to only two days’ supply of fuel available at the time of the battle.

In preparation for the attack, Rommel prepared his defence further, with some 500,000 anti-tank and anti-personnel mines sewn across the front of their fortifications by the time of the battle. The plan for the British involved a diversionary attack to the south by the Free French soldiers while the main attack came in from the north.

The idea was for British forces to break the Axis line in order to compel a counterattack, during which the Axis’ attack would be blunted irreparably. And so it was: on the night of the 23rd of October, 79 years ago to this day, a tremendous barrage of more than 800 guns heralded the offensive, followed by British sappers, infantry and tanks who sought to clear a path through the vast and dangerous minefields.

Despite the ferocity of the assault, the Eighth Army’s progress was slow, with the British armour struggling to make headway. Rommel’s counter was also more spirited than Montgomery might’ve hoped, and for a time it seemed as though the Axis powers may grind the British offensive to a halt. The minefields had done their job, knocking out scores of British tanks; however, the brave soldiers of the Australian and New Zealand divisions opened up pathways though the Axis defences which the rest could then exploit.

After days and days of bloody fighting, Montgomery and the other allied leaders planned one last assault, deemed Operation Supercharge. The aim of this final charge was to break the enemy once and for all by forcing them out of their positions and out into the open. This last phase was quite unlike anything that went before, and was conducted with such intense fervour, such ferocious destruction, that it dwarfed all else.

It began with a seven-hour aerial bombardment and four and a half hours of shelling, followed by two assault brigades who then made their strike. These included the much respected 28th Maori battalion, New Zealand engineers and Royal Dragoons. After endless hours of fighting, the Axis forces were on the brink of doom.

Montgomery’s tactical nous and considerable courage, along with that of his men, had carried the day. On the 2nd of November, Rommel signalled to Hitler that they had lost. Initially, he was refused permission to retreat, as Hitler commanded “As to your troops, you can show them no other road than that to victory or death”. Rommel wholeheartedly disagreed, suggested that the instruction “demanded the impossible… We were completely stunned, and for the first time in the African campaign I did not know what to do. A kind of apathy took hold of us as we issued orders for all existing positions to be held on instructions from the highest authority.”

Eventually, retreat they did. Rommel began the withdrawal of the German units, abandoning his Italian allies (who were without transport). By November the 8th, all elements of the axis were in retreat, and now caught between their vanquishers to the south and an Anglo-American landing in the north. Their defeat was now complete, and devastating in its numbers: some 9,000 Axis soldiers died, a further 15,000 wounded and 30,000 captured. The Allies, meanwhile, also suffered heavy losses, with 4,800 dead and 9,000 wounded.

El Alamein was a huge turning point in the conflict, and one in which the total superiority of the Allied forces at last began to show. Allied artillery and air support showed remarkable courage and steel, outperforming the Axis powers at every turn.

Today we pay homage to these extraordinary men and all who served in this most decisive of battles.

How Our Online Shop Has A Big Impact…