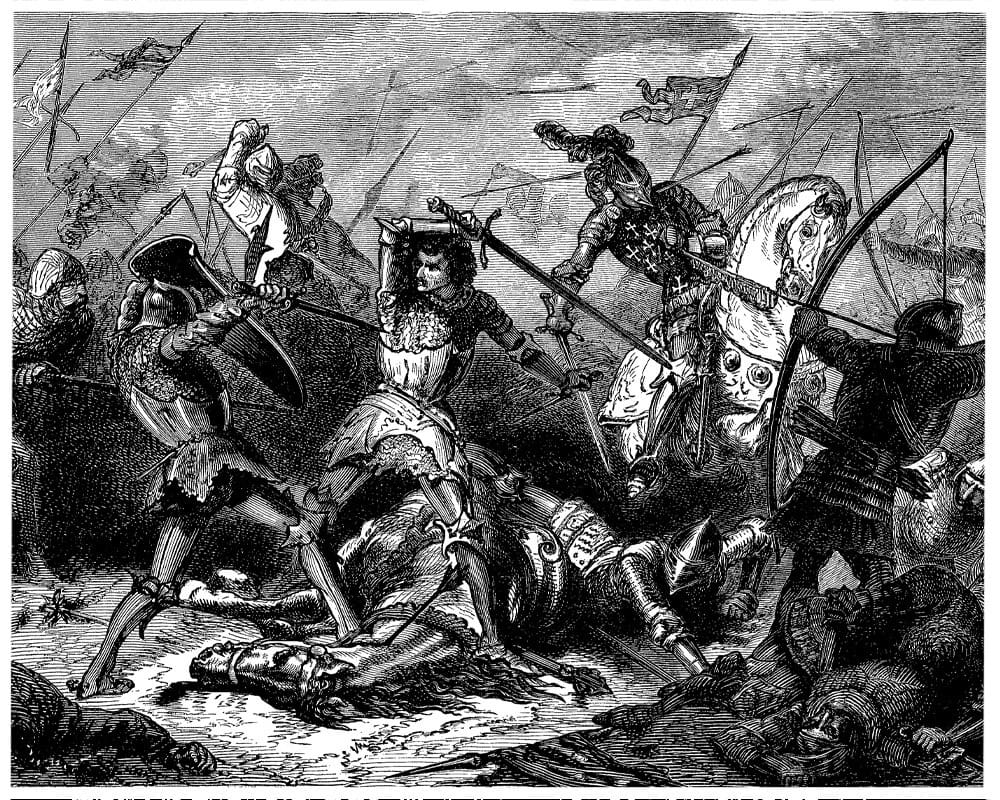 This day, the day of St Crispin, marks the 606th anniversary of the Battle of Agincourt, a momentous occasion and one of the most legendary battles in all of history. Part of the wider conflict that historians have deemed the Hundred Years’ War – erroneously, as the span of the war(s) actually lasted 116 years and encompassed three separate but interlinked wars – Agincourt has come to typify that sense of defiance, of battle against all odds, than would become synonymous with the English. Moreover, it has become emblematic of the world-spanning rivalry between England and France.

The event – as long as the titanic figure of King Henry V – have since been forever preserved by the immortal bard himself, William Shakespeare. Even after six centuries, we still have at least seven contemporary accounts of the battle, three from eyewitnesses. Similarly, the site itself has changed little in the intervening years and its location has never been in question.

“This story shall the good man teach his son;
And Crispin Crispian shall ne’er go by,
From this day to the ending of the world,
But we in it shall be remember’d;
We few, we happy few, we band of brothers;
For he to-day that sheds his blood with me
Shall be my brother; be he ne’er so vile,
This day shall gentle his condition:
And gentlemen in England now a-bed
Shall think themselves accursed they were not here,
And hold their manhoods cheap whiles any speaks
That fought with us upon Saint Crispin’s day.”

The precursor to the battle was Henry V’s claim to the throne of France through his great-grandfather Edward III of England. Although usually English kings were prepared to renounce this claim – on the condition that the French acknowledge the claim on Aquitaine and other areas as set out in the Treaty of Brétigny – Henry felt it his given right to claim the entire kingdom.

After meeting with his advisors in 1414, Henry was convinced to moderate his claims, and instead asked for the lands of Anjou, Brittany, Flanders, Normandy, Touraine and Aquitaine, 1.6 million crowns (owed for the ransom of John II, who had been captured at Poitiers some years prior) and 2 million crown dowry for the hand of the King of France Charles VI’s daughter, Catherine in order that he renounce his claim to all of France.

The French responded with a dowry of 600,000 crowns, the hand of Catherine and an enlarged Aquitaine. Insulted, on the 19th of April 1415 Henry once more called a Great Council to sanction war with France; this time, they would agree.

So began the invasion. An enormous fleet of some 1,500 ships was said to have crossed the channel, and an army of 12,000 men and up to 20,000 horses besieged Harfleur. Although the town would eventually succumb on the 22nd of September, it would be another two weeks before the English army moved on and the number of casualties sustained through disease was seriously hampering any further progression. As a result, Henry decided that it would be best to recoup at the English stronghold of Calais.

This move was also a deliberate incitement to battle aimed at the dauphin (Louis, Duke of Guyenne, the French King’s son) after his failure to engage with Henry’s personal challenge at Harfleur. Over the course of that town’s siege, the French had amassed an army of nobles at Rouen. As Henry moved north after the engagement, the French moved to block his passage along the banks of the River Somme.

Henry diverted his forces and eventually crossed south of Péronne, and returned to their march northwards. Deprived of the shelter of a river, the French were reluctant to go straight into battle. Instead, they followed Henry’s army while calling a semonce des nobles (‘summon of the nobles’). By the 24th of October, both armies faced each other in preparation for battle, however, the French forces demurred, preferring to wait for additional reinforcements.

Henry decided to seize the initiative, much to the chagrin of his army: they had marched 260 miles (420km) in just over two weeks, were sick from dysentery, and were vastly outnumbered by the French. Henry was in a seemingly unwinnable situation; his enemy had blocked his pathway to the safety of Calais, and his men were getting weaker by the moment. To tarry or to fight – either way, he had run out of time. He decided to choose the former.

Henry’s forces stood across a 750-yard part of a narrow pass, with himself in the centre, flanked either side by Edward, Duke of York to his right and his trusted friend Baron Thomas Camoys to his left. His army was comprised of a mere 1,500 men-at-arms and 7,000 longbowmen, many of whom stood at either bank of the pass. Stakes were driven into the ground in front of the archers to ward off oncoming horsemen.

The French Army, on the other hand, stood tall and resolute: with some 10,000 men-at-arms each with an armed servant (or gros valet) and 4-5,000 footmen, their numbers dwarfed that of the English upstarts. They organized themselves into two main groups, a vanguard and main ‘battle’ behind. An elite cavalry force formed part of this vanguard, whose sole purpose was to break the formation of the archers and clear the way for the infantry.

Sensing victory, many French nobles demanded they be placed on the front lines, thus giving themselves more chance at glory. They set out in tightly-packed formations, row upon row of gleaming armour weighed down by the sodden conditions.

The French cavalry charged towards the longbowmen, headstrong and filled with bloody anticipation. It would prove a disastrous move – unable to outflank the longbowmen due to the tangled woodland around and unable to penetrate through the array of sharpened stakes, it became a maelstrom of churned ground, panicked horses and twisted iron.

Meanwhile, the French men-at-arms trudged slowly through what a contemporary French monk of Saint Denis described as ‘a terrifying hail of arrow shot’; whilst the better steel armour could withstand direct hits from the longbowmen’s strikes, those coated in wrought iron would find themselves pierced through. Nevertheless, every suit of armour has its chink, and even the most decorated knights found their limbs and joints under extreme duress.

Those that did make it to the front found that the lightly-armoured (and less encumbered) longbowmen could quickly switch to the swords, hatchets and mallets that they had used to hammer in the stakes. These disoriented and wounded men-at-arms massed it front of the longbowmen, but were quickly cut down. The mud, slog, arrows and heat had made them a prisoner in their own armour. The melee developed further with the French second wave, yet they, too, were devoured by the ceaseless arrow fire and drowned in a sea of corpses. Historian CJ Rogers argues that in such a press, ‘thousands may have suffocated in their armour’.

The ceaseless hail of arrows – historians suggest that a skilled longbowmen could fire 12 per minute, with an expert potentially double that amount – the mud, the toil and the sheer grit of the English and Welsh decimated the numerically superior French in such a way as to make a mockery of the French Knights’ pact to kill Henry V and knock the crown from his head. While the king was struck on the helm and his crown chipped, he held to the last, even defending his younger brother Humphrey while he was wounded on the ground.

After the battle, Henry grew ruthless: fearing a second attack, he summarily executed the surviving Frenchmen, forever blunting the French nobility. One historian noted that the dead ‘read like a roll call of the military and political leaders of the past generation’. Their number included 120 great lords, three dukes, nine counts, one viscount and even an archbishop. Of the holders of great royal office, the French had lost their constable, an admiral, the Master of Crossbowmen, Master of the Royal Household and prévôt of the marshals. Entire noble families were wiped out in a single day.

Despite the sheer scale and depth of the victory, Henry did not immediately capitalize on it. Instead, he returned to London to great fanfare and acclaim on November 16th, and was seen as a conquering hero blessed by God. So it would prove, albeit his story is laced with tragedy: after securing his claim to the French throne after a second invasion and named heir to Charles VI, he would die of dysentery two months prior to the French king. His son through his marriage to Charles’ daughter Catherine would, however, become King of France for a short time.

Henry V remains an iconic, defining figure in English culture. The consummate warrior-king who defied all odds, only to be struck down by disease just at the moment of complete victory, his story has evoked tale after tale and adaptation after adaptation, but never was he bettered than in Shakespeare:

“Once more unto the breach, dear friends, once more;

Or close the wall up with our English dead.

In peace there’s nothing so becomes a man

As modest stillness and humility:

But when the blast of war blows in our ears,

Then imitate the action of the tiger;

Stiffen the sinews, summon up the blood,

Then lend the eye a terrible aspect;

Let pry through the portage of the head

Like the brass cannon; let the brow o’erwhelm it

As fearfully as doth a galled rock

Swill’d with the wild and wasteful ocean.

Now set the teeth and stretch the nostril wide,

Hold hard the breath and bend up every spirit

To his full height. On, on, you noblest English.

Whose blood is fet from fathers of war-proof!

Have in these parts from morn till even fought

And sheathed their swords for lack of argument:

Dishonour not your mothers; now attest

That those whom you call’d fathers did beget you.

Be copy now to men of grosser blood,

And teach them how to war. And you, good yeoman,

Whose limbs were made in England, show us here

The mettle of your pasture; let us swear

That you are worth your breeding; which I doubt not;

For there is none of you so mean and base,

That hath not noble lustre in your eyes.

I see you stand like greyhounds in the slips,

Straining upon the start. The game’s afoot: