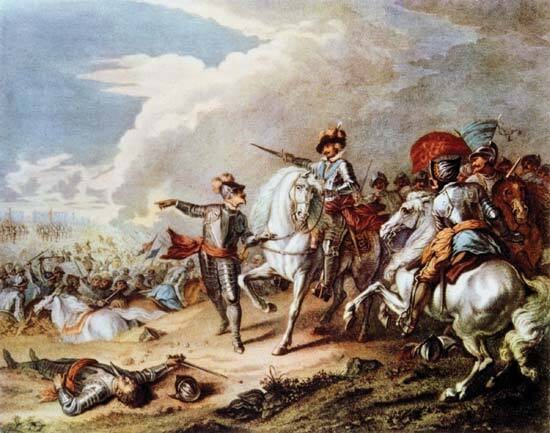 This day 370 years ago marks the end of the bloodiest single war in British history: the English Civil War. Despite its terminology, the war actually encompassed both Wales and Scotland as well as then-confederate Ireland. In
terms of raw casualties and participation, up to 15-20% of all adult males in England and Wales served in the military, and around 4% of the total population died as a result (compared to 2.23% in World War I).
Spanning nine years and 12 days from the 22nd of August 1642 to the 3rd of September 1651, historians often tend to split the larger war into three constituent parts for a variety of reasons: the First English Civil War (1642-1646), the Second English Civil War (1648-1649) and the Third English Civil War (1649-1651).

Following the death of the much-celebrated yet childless Elizabeth I and the end of the House of Tudor, the crown fell to her first cousin twice-removed and monarch of Scotland James VI (later James I of England), creating a Union of Crowns that would come to define much of the latter half of the millennium both for Britain and the wider world beyond.
As King of Scotland, James had become well used to the weak parliamentary tradition of his homeland and was unaccustomed to the robust constraints placed upon him by the far more vociferous English Parliament. In particular, this meant that his personal penchant for luxury and pageantry was tempered by the monetary limitations of the English system. Although parliament at the time existed nominally upon the will of the monarch, in reality it constituted the bulk of the landed gentry and thus the ability and authority to collect taxes at the local level.
However, James’ peaceful disposition, literary flair and tendency towards low taxation earned him the affections of the people, and, despite his flaws (such as a proclivity towards political absolutism – he once claimed that kings were ‘little gods on Earth’, chosen to rule by God himself in accordance with the doctrine of the Divine Right of Kings) he was much mourned upon his death.
That death occurred in 1625, and he was to be succeeded by his ill-fated son, Charles I, who shared James’ vision for a single kingdom of England, Scotland and Ireland, as well as a firm belief in the unqualified power of the crown. Such a move caused much consternation in the ranks of the English parliamentarians as they feared (with some justification) that a unified crown placed upon the head of an absolutist ruler would spell doom for the English traditions that had hitherto bound the English monarchy.
Those fears were then compounded by Charles’ marriage to the Roman Catholic princess Henrietta Maria of France, who, due to her religion, would never be coronated. Indeed, as a result of this marriage, parliament refused to assign to him the right to collect customs duties for the entire course of his reign, instead granting it only on a provisional basis. Meanwhile, Charles’ failed expedition to relieve French Huguenots in 1627 provided parliament with sufficient basis to impeach the king: his response was to dissolve parliament entirely.
Following numerous disputes with new parliaments arising before being dismissed (up until the Long Parliament in 1640, which would last intermittently for 20 years), two main factions arose: those that were broadly in support of the king, and those in support of parliament. History remembers these as the Royalists and the Parliamentarians (nicknamed Roundheads) respectively.

The three major wars would go on to help shape the fate of the British Isles for centuries to come – even today, attitudes both in Britain and Ireland are indelibly marked by the events that transpired. The first war would come to encompass the majority of Britain, as Scots Covenanters joined the Royalists after early successes. However, the formation of the New Model Army, the first professional military force in the country, would prove to be the catalyst for unbridled military success. This emergent force was quite unlike any that came before: highly organized, tactically astute and tempered by a rigorous discipline and religious fervour, the army would come to dominate all that came before it.
So it proved: the First War (1642-1646) ended in victory for the Parliamentarians in June 1646, with the capture of King Charles. However, there followed a brief power struggle between the three main extant factions (Royalists, Independents of New Model Army and the Presbyterians and Scots). Although defeated militarily, the Royalists still held considerable political sway, and it was considered that Charles would still be key to any future developments.
The king would use this to his advantage, allying with the Scots in a secret treaty under the promise of church reform. Eventually this would lead to uprisings across the country, as well as a tentative invasion of England from the Scots under the Duke of Hamilton. This Second English Civil War would last only a year, from 1648-49, with Cromwell’s army once again sweeping to victory.
Charles’ behaviour in facilitating this conflict through his covert pacts would lead to him being executed on the 30th of January as a ‘tyrant, traitor, murderer and public enemy’. His son, Charles II, was then proclaimed king on the 17th of February 1649.
In the wake of these events, the Irish Confederates who had allied with the English Royalists attempted to eliminate the Parliamentary army in Dublin but
were routed at the Battle of Rathmines on the 2nd of August 1649. Cromwell would then go on to conquer Ireland in its entirety, and his suppression the Royalists in Ireland and is still remembered today, especially his massacre of 3,500 people at the Siege of Drogheda which would fuel Catholic-Protestant and nationalistic divides for centuries to come.
Meanwhile, Charles II would amass another Scottish force to continue the war, yet despite the fatigue and disease that haunted Cromwell’s men, he would once again claim victory at the Battle of Dunbar before taking Edinburgh and much of southern Scotland. Afterward, Cromwell would march across the Firth of Forth into Fife and would defeat the Scots at the Battle of Inverkeithing in July 1651. However, Charles would circumvent the Parliamentarian charge and march on to the Royalist stronghold of Worcester.
It was there that the final conflict would take place, bringing an end to the Third
English Civil War. The battle would be disastrous for the Royalists, as their
defences quickly broke and they were summarily routed. At the conclusion of the
Battle of Worcester, 3,000 Royalists had been killed and a further 10,000
captured, compared to the New Model Army’s 700 deaths. Although Charles had
escaped, that day 370 years ago would signify the total collapse of the Royalist
movement.
The Legacy
Cromwell would go on to rule the country as Lord Protector, effectively a military
dictator, until his death in 1658. This brief period as a republic would finally end
when Charles II returned from exile in 1660 and acclaimed as king. Monarchy
had been restored, yet England (and Britain) would be forever changed. No
longer could parliament exist merely on the whim of the king, and it set the
seedbed from which constitutional parliamentary monarchy would later flower:
the ultimate incarnation of which would be the United Kingdom of Great Britain
and Northern Ireland itself.

Anniversary of the Battle of El Alamein