Take part and join at St Mary’s Church on the 26th June to show your respect and thank our past and present serving armed forces.

Continue reading, with these fantastic images from the Hinckley event itself from past years.

Armed Forces Week is right around the corner!

From currently serving troops to service families, cadets to veterans, regulars to reserves, Armed Forces Week seeks to encourage support from across the country for our servicemen and women.

This year’s celebrations are set to include parades and festivities across the country, while the host town of Scarborough will see demonstrations by the Red Arrows! 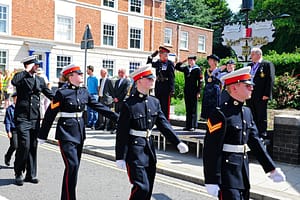 Reservists are those who give up their leisure time to serve in the Reserve Forces, a balance between civilian life and military career and make up roughly one-sixth of all Armed Forces personnel. They play a crucial role in protecting us both at home and abroad, particularly in specialist sectors like medicine and cyber-security. Indeed, the Reserves have been especially key in assisting the nation during the COVID-19 pandemic.

On Reserves Day, our Reservists shun their usual attire in favour of full uniform in their civilian lives – you will see them from all walks of life and from every background!

What began in 2006 has since bloomed into a perennial highlight of the military calendar as servicemen and civilians alike come together to celebrate our armed forces in a spirit of appreciation. Both physical and virtual events are set to mark this year’s Armed Forces Day – you can find your local commemoration here.

Events like these deliver a much-needed morale boost for the troops, their families and wider communities, particularly in these trying times. So, who are our Armed Forces?

The UK Armed Forces is on hand to defend both the UK and its wider interests. They promote peace, deliver aid, tackling drug smugglers, provide security and take on terrorism across the globe every day.

A veteran refers to anyone who has served in the HM Armed Forces at any given time (this includes National Servicemen, Regulars and Reserves). Armed Forces Day is here to show gratitude to their continual role within the broader military community.

Reservists are an integral part of our national defence: should their country require them; they will be ready to serve.

The Cadet Forces (comprised of the Sea Cadets, Army Cadets, Air Cadets and Combined Cadet Force) currently supports over 130,000 young people across 3,000 locations in the UK. Being in the cadets teaches invaluable career and life skills (as well as vocational qualifications) that enable recruits to get the very best out of their future careers, civilian or otherwise.

Simply put, our Armed Forces couldn’t realise their tremendous potential without the unwavering and vital support of both friends and family.