MY VISIT TO NORMANDY PRIOR TO D-DAY #75

For years I have watched my wife go off to Normandy with fellow school teachers and 30-odd children to be there for D-Day – visiting the beaches and the War Graves.  She has loved going, and always explained how humbling it is.

This year her school couldn’t do this visit to be there for D-Day as it fell outside their half term holiday – so we both decided that we would go on our own – for the first time.

I knew it would be an emotional visit, but I really wasn’t prepared for just how many tears I would shed almost on a daily basis.

This is a brief summary of our how our itinerary progressed through last week – an itinerary which we put together before we left our home in Nuneaton. 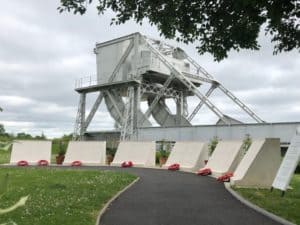 We sailed from Portsmouth to Caen – arriving in Ouistreham at 3pm (CET).  The first place on our schedule was Pegasus Bridge and its Memorial Museum near to Benouville.  This and the Café Gondree nearby, were the first places in France to be liberated.  In the early minutes of 6th June 1944, six gliders carrying 6th Airborne Division troops led by Major John Howard, landed in a field right next to the bridge with orders to take and hold the two local bridges (Pegasus and the nearby Horsa Bridge) vital to prevent a German counterattack on the Eastern flank of Allied forces landing at Sword Beach.  The above photo includes memorial stones for each of the six gliders’ crew.

On a lighter note, as we left the car park at the Pegasus Memorial to head for Sword beach (by crossing Pegasus Bridge), it raised to allow three tall yachts through, and promptly got stuck!  After waiting 15 minutes, a stressed Frenchman advised everyone to turn around and find another route.

From there we stopped briefly to look at Sword and Juno beaches – two of the main beaches of the Normandy landings on D-Day 1944.  We were to visit these a couple more times during the week, as our main aim early evening was to find our way to Bernieres-sur-Mer which was where my wife, and her school party have been based during their previous visits over the years.  There we saw Canada House on the seafront – arguably the first house in France to be liberated on D-Day by seaborne Allied Forces.  Within sight of this house, over 100 of The Queen’s Own Rifles were killed or wounded in the first few minutes of the landing!

We then settled in our hotel in Asnelles-sur-Mer near Gold Beach – the third of the five landing beaches.  We knew tomorrow was going to be a difficult day.

After croissants and coffee, we set off for the American Cemetery at Colleville-sur-Mer overlooking the fourth beach of Omaha.  You can google the story of the forces landing on Omaha Beach.

I had only ever seen photographs of the all the crosses here and at Bayeux, which we visited later in the week.  Oh my word!!  Walking round the paths through the trees and then revealing the opening to see all of these crosses suddenly hit my heart – in that single moment I could tangibly feel the devastation of what happened here.  There are 9,388 servicemembers actually buried here – including 45 pairs of brothers (30 of which are buried side by side), a father and his son, an uncle and his nephew, 2 pairs of cousins and many others – as well as 307 unknown soldiers with “Here rests in honoured glory a comrade in arms known but to God” engraved on their headstones.  Heartbreaking in its own right.  The crosses don’t bear the dates of birth or ages of these servicemembers because they were all there for the same purpose – their age didn’t matter.  This is different to the Allied cemetery in Bayeux which does include this information.

Such a humbling experience – it is impossible to describe.  We had the honour of having a young French lady called Sandrine to guide us around part of the cemetery for about an hour.  She relayed two stories which she had personally researched, from relatives she had comforted at the gravesides here.  The point of which was to help us realise the whole extent of the devastating effects for homes around the world who had lost, in many cases, more than one member of their families.  At the end of her guide, I waited until people had asked questions, and approached her with tears flooding from my eyes and gave her the biggest hug to thank her for helping me understand just what all of this meant.  Not just for the soldiers and their families, but also to the people of Normandy and France.  I thought I knew quite a lot of what happened, but, oh no I didn’t!!  Undoubtedly the most humbling experience of my 52 years on this planet.

Since our return home I have relayed her stories to some of my work colleagues and family, and can’t do it without crying.

From the American Cemetery, we headed towards Arromanches-les-Bains where we planned to eat.  However, we stopped en route for a short visit to the Batterie at Longues-sur-Mer.  This is a well preserved Gun Battery – which serves as a grim reminder and testament to the memories of those that set about liberating Europe in June 1944.  There were four emplacements (casements) and a command post, but now only three of the casements still house the 150mm guns – which could fire a shell 12 miles out to sea!!  These were captured only one day into the D-Day landings!

We then went to the 360 Circular Cinema overlooking Arromanches.  The short 18 minute film shown here sums up the entire story of the German occupation of France, through to the liberation on D-Day 75 years ago on this day in 1944.  On top of our emotions from Courselles this morning, we were left standing at the end of the film with more tears rolling down our cheeks – like all the other 60 odd people around us!  We then walked down into Arromanches itself – be ready for the climb back up afterwards by the way!  We had our evening meal here, looked around the shops, looked out at Gold Beach and the remaining structures of the incredible Mulberry Harbour – which was built and moved into the bay here to enable the Forces to get their vehicles onto land.  Google Mulberry Harbour to get full details.

We spent the evening back in Bernieres-sur-Mer walking along Gold beach recalling the emotions of this incredibly humbling day.

We spent the entire day in the beautiful town of Bayeux.  Firstly visiting the Museum of the Battle of Normandy – which was excellent with a very non-biased atmosphere.  There is information on all the Allied Forces as well as info on the German view of things too.  Fantastic place – well worth spending a couple of hours here.

After a light lunch of baguettes and French cheese, we walked into the centre of Bayeux.  We visited the incredible Tapestry, and then went into the amazing Cathedral.

From there we walked up to the Allied Forces Cemetery in the Town.  This was being prepared for the main ceremony here on D-Day itself, which is being broadcast live on BBC1.  The cemetery contains 4,144 Commonwealth burials of World War 2, as well as over 500 war graves of other nationalities, the majority of which are German.  As I said earlier, the dates of birth and ages are included on the headstones here.  Devastating to see ages from 18 upwards here.  So sad.  The German graves are here too – presented slightly differently to the others.  Every grave here is so well looked after and beautifully tended.  A wonderfully peaceful, and very humbling place to reflect on the events here.

We gave ourselves a little breather and chilled for a while to take in the local village of Asnelles-sur-Mer (especially Les Sables d’Asnelles : the biscuit factory) and walking along Gold Beach and revisiting Bernieres-sur-Mer again.

We were determined to visit a French market while we were here, so went back into Bayeux to see theirs during the morning.

In the afternoon we went to Courselles-sur-Mer to visit Juno beach, and our main target, the Juno Centre.  This is a centre particularly commemorating the Canadians landing here on D-Day.  There is so much to read here, we couldn’t take it all in, so plan for a good couple of hours here if you can.

I am an audiologist with Hear4U in Leicester, and one of our sister companies UK Veterans Hearing Help assists veterans in applying for funding from the British Legion to get fully funded top of the range hearing aids.  Up until coming to this Juno centre, I hadn’t seen any real recognition of hearing loss to those survivors of the tremendous battles and fighting that went on here.  I guess it’s not the first thing on peoples’ minds.

Many soldiers experience hearing loss, particularly in later life, which was very likely caused during not just these battles, but many other battles/wars since World War 2.  Some bombardments were so intensive that a soldier’s eardrums could burst if he/she was exposed for too long, causing painful bleeding and severe damage.  The photos below show what sort of noise levels are comfortable or dangerous.  You can contact UK Veterans on 01455 248900 if you feel you have a hearing loss caused by artillery/explosions or email:  info@veteranshearing.org.uk

We chilled again and visited several smaller Memorials in the area.  We will return again with my in-laws and my Mum as they’ve never been.  We are still gutted that we couldn’t actually be here for D-Day itself but our thoughts will always be here after such an overwhelmingly emotional visit this week.

You can’t imagine what was going through the minds of those who served here during the Normandy Landings.  Stepping off the landing craft to a hail of rifle and machine gun fire.  Soldiers saw things that you should never see – and those memories have stayed with them throughout their lives.

Yes the number of Veterans are dwindling rapidly, but we should NEVER forget them and these remembrance services/events/memorials should NEVER stop!  Europe was liberated and it was all a result of the Battles in Normandy – we live how we do now because of the brave men and ladies of the Allied Forces back in 1944.

OUR BRAVE HEROES GAVE US THEIR TODAY SO WE COULD HAVE OUR TOMORROW.