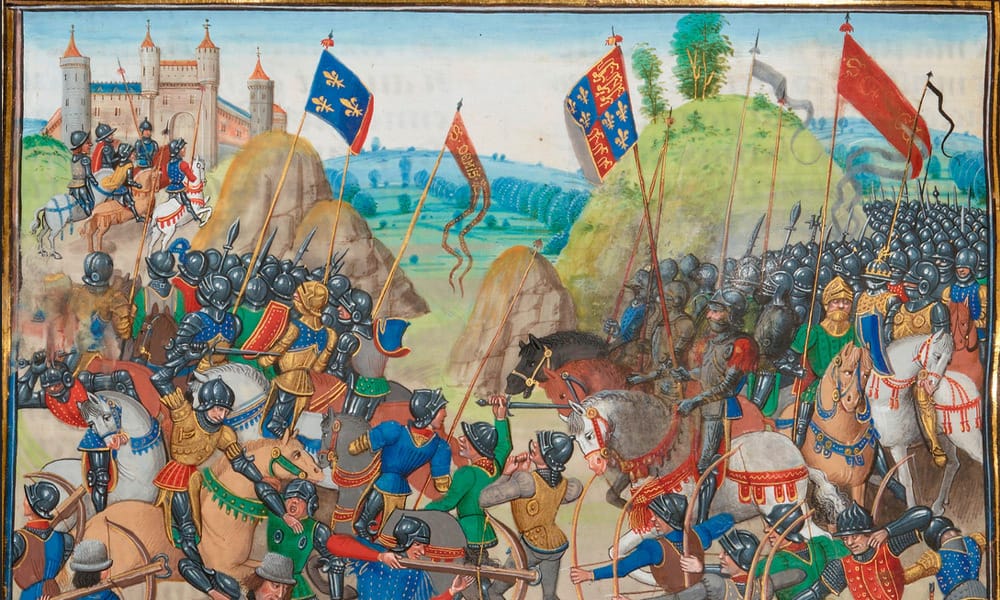 Today marks the 675th anniversary of the end of the Battle of Crécy, a momentous conflict that was to determine the fate of Calais for more than two centuries, and whose after-effects loom large in the nation’s collective consciousness. Indeed, the battle would play no small part in cementing the notion of never-say-die, of the ability to face overwhelming odds and still emerge victorious that would go on to become the hallmark of the English (and later British) army.

Ever since the Norman invasion and William the Conqueror’s ascension to the English throne, French and English monarchs had disputatious claims to areas consigned to what is now France. After a long litany of fierce disagreements between Edward III of England and Philip VI of France, the latter’s Great Council convened in 1337 and decided that the former’s French possessions should now be forfeit. This decision marked the beginning of 116 years of conflict, which historians have since referred to as the Hundred Year’s War.

The first eight years involved sporadic, expensive and ultimately ineffectual battle. Edward conducted three campaigns in northern France, but made little headway. Gascony, meanwhile, was left to its own devices and the French were able to conduct continual battles of attrition, slowly wearing down the Anglo-Gascon forces. Edward attempted yet another campaign in 1845, yet his army’s ships were scattered by a storm, staying his hand until at least the winter.

Henry of Grosmont, Earl of Derby, trusted friend and captain of the king and later 1st Duke of Lancaster, found his fortunes more favourable. Having held the line for eight long years against the guerrilla encroachments of the French, Henry could wait no longer and took the war to them. He led a dazzling campaign through Gascony, defeating two large French forces at the battles of Gergerac and Auberoche and capturing over 100 French towns and fortifications along Périgord and Agenais to bolster English possessions in region and create a bulwark from which to regroup.

The French army was far from consigned to defeat, however, and roused an astonishing response. In March of 1346 they raised an army of between 15 and 20,000, comprised of all the military officers of the royal household under the command of John, Duke of Normandy, son and heir to the French king. Together they marched on Gascony, besieging the strategically important town of Aiguillon. The Earl of Derby (now Duke of Lancaster) called upon Edward for help against this vastly superior force.

The English king dutifully amassed a fresh army, and an even more impressive fleet: Edward’s 700 ships amounted to the largest English armada there had ever been to that point. The French knew of Edward’s machinations and relied on their strong navy to repel the would-be invaders at sea. This reliance was deeply misplaced, and the French were powerless to prevent Edward’s crossing. His forces arrived in Normandy on July 12th, 1346, and quickly used their advantage, carving a path of untold destruction through every burned town in their path.

John’s army was, meanwhile, still locked into the siege of Aiguillon. Fearing Edward’s unimpeded advance through northern France, John proclaimed an arrière-ban for the entire region, a call of conscription that commanded every able-bodied man to convene in Rouen where the French king himself arrived on July 31st. By the 12th of August, English forces were camped at Poissy, roughly 20 miles from a bedraggled and refugee-swollen Paris.

The French king ordered his son to abandon the ill-fated siege of Aiguillon, and march his army over to assist his own. However, John would never reach the battle in time: after several tactical repositions along the Somme River, Edward would come to prepare a defensive position at Crécy-en-Ponthieu. He would stay his meagre army of 10-15,000 men there against an overwhelming French force estimated to be anywhere between 30,000 and 120,000-strong. Accounts differ as to the exact size of the French military, but modern historians list it as at least double, if not triple, that of the English army.

Despite the seemingly insurmountable odds, Edward marshalled his troops effectively: the three battalions stood in rigorously selected positions, facing towards the southeast on an angled hillside broken by copse and terrace. The area surrounding Crécy-en-Ponthieu had been known to the English for quite some time, which made it far easier for the armies to position themselves affectively. In fact, so well were they poised between Wadicourt and Crécy that it was nigh-impossible for the French to outflank them. Unlike the French, who tended to use hired Genoese crossbowmen, the English used the now-legendary longbowmen to sit atop the compound’s defences.

Meanwhile, at the centre of the vanguard stood Edward, Prince of Wales, son of the king and known to history as The Black Prince, with the earls of Northampton and Warwick by his side. To his left was the Earl of Arundel and his battalion of 2,000; in the reserve, the king himself with 700 men-at-arms and a further 2,000 archers.

At noon on August the 26th, French scouts were first sighted by the English army. Upon hearing that the English had turned to fight, the French knights jostled with each other for position at the front of the column, all sense of discipline abandoned as the senior French officials were completely certain of victory. However, they still delayed a day further in order to reorganise. The French king’s plan was to use the long-range arrows of his Italian crossbowmen in order to weaken the English infantry and sow discontent among their ranks.

And so the battle began in earnest, with an archery duel breaking out under the cover of a rainstorm. Sensing their triumph, the French unfurled their sacred battle banner, the oriflamme, which indicated to the English that no prisoners would be taken: it was to be victory or death. However, the English longbowmen vastly outranged the Genoese crossbowmen, and could fire three times as many arrows in the same time period. What’s more, the Italians were stuck without their pavises (large shields) which were still caught in the rear of the French entourage. Even more devastating for the crossbowmen were the conditions – the mud and rain seriously impeded their ability to reload, and, their morale shattered, the English longbowmen quickly decimated their ranks, causing the Italians to flee.

Disgusted at their perceived cowardice, the French knights and nobles hacked at them as they ran, causing chaos as the advancing cavalry became mixed with the retreating Genoese. The English longbowmen took full advantage and continued to fire into the assorted troops, and even used an early form of artillery, the Ribauldequin, to further lay waste to the French. This was the first time in recorded history that the device was used. King Edward’s was said to have had twelve barrels, which in turn fired salvoes of twelve balls.

Afterward, the French nobility attempted to charge with their cavalry. Their advance would be an ill-fated one: with fleeing Genoese in front of them, mud-strewn ground, an uphill charge strewn with various pits dug by the English, as well as the constant rain of fire, the French were in dire straits.

In addition, their horses were not armoured, so as the charge continued arrows cut through them, leaving pile after pile of dead horse and trapped rider. As a result, by the time the charge reached the English formation of men-at-arms and spearmen, its force had all but abated. The hand-to-hand combat that ensued was particularly fierce, deemed ‘murderous, without pity, cruel and very horrible’ by contemporary historians.

By the following day, August 27th 1346, the French noblemen had been utterly devastated: Philip had abandoned the field of battle, having received an arrow to the jaw, and the oriflamme had been captured. Despite the relative size of both forces, the battle had been a slaughter. Only two Englishmen killed at the battle were ever fully identified, with casualty estimates numbering around three hundred. The French, meanwhile, had estimated losses for anywhere between 12,000 to 30,000. Among these losses were some of the crème de la crème of the French nobility, with King John of Bohemia, nine princes, ten counts, a duke, a bishop and an archbishop all among the bodies.

Described variously as a ‘total victory’, ‘a devastating military humiliation’ and ‘unprecedented’ by historians Clifford Rogers and Andrew Ayton, Crécy remains one of the most spectacular victories in English and British history, yet it remains little-known outside of select circles. However, the repercussions of the battle still help colour our shared sense of identity, perhaps unwittingly, even today 675 years later.